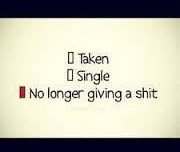 As a young girl, I remember my mother repeatedly telling me I didn’t need a man in my life.  Not to depend on one for anything; to learn to be independent, to choose a career that would allow me to take care of myself financially.   It was a recurrent theme for years, and in large part how I ended up becoming a lawyer (saving that for another post, don’t you worry).  So you can imagine my amusement over her increasing obsession with me finding Husband #3.

I spent about four hours with my parents celebrating Mother’s Day, and in those excruciatingly long 240 minutes, my mom made at least four attempts at discussing my current love life.  Or more aptly, the lack thereof.   It’s a pretty standard topic of conversation for her during my visits, usually worse when my kids aren’t around.  And once again, she didn’t disappoint. She started with a question about my most recent failed “relationship.” Feigning ignorance of the information I had given her two weeks ago, she had her opener.

K:    ​The last time I checked my tubes are still tied.  Sort of makes me a non-starter in the whole having a baby thing.

M:​   See, that’s why you need to find an older man.  They already have kids. They don’t want more.

She laughed awkwardly and the situation was diffused, temporarily of course, because she’s nothing if not persistent. It was probably another twenty minutes or so before she tried again.  This time she wasn’t as subtle.

Enter my dad (who is actually my step-father, Jewish, and if you follow me on Twitter you already know, a tad insane):

​D:   ​I think you should try Christian Singles.

After a hearty chuckle by all, it was time for dinner, which thankfully was uneventful, mostly because her mouth was occupied by pasta. We eventually exchanged Mother’s Day cards, she cried and hugged me tight, and I naively thought I was out of the woods. Silly me!

Over chocolate cake, she treated us to a delightful little story about a show she had recently watched. It involved a group of college girls who “dated” older men in exchange for compensation of some sort, such as paying their tuition.  Almost as an aside, she casually mentioned that one of the girls ended up dead after a little BDSM with some “kinky” older gent went wrong.  I’m still not sure whether it was an episode of Dateline or Jerry Springer, but nevertheless, the take away was that I should perhaps try my hand at escorting (“He paid for her COLLEGE, Kat”).  Until I reminded her that it’s illegal, and that the second girl DIED after being choked too hard, I think she honestly believed she had found a viable option for the two main things she sees as lacking in my life: a man and money. But thanks to few zingers from my dad about how awfully dry the gluten free cake was that my aunt had baked, the latest attempt at Find Kat A Husband came to an end without me losing my cool. I said my goodbyes, anxious to get home and Cabernet-away the bulk of the afternoon’s conversation.

But as I drove home, I couldn’t help but wonder (and maybe worry a little) whether taking my mom’s advice to not rely on anyone else had been the right decision.  Would that decision somehow influence my daughters’ views on relationships?   Though my mom preached to me about not depending on a man for anything, when I think back, I don’t remember seeing her do something as simple as change a light bulb on her own.  She was also single for about five minutes after she and my biological father split, whereas I’ve been by myself for the majority of my girls’ lives (they were 3 and not even 2 when their father and I separated almost five years ago).  They’ve seen men as a complement to my life, not as a necessity.  And while I’ve come close, they have never seen me with an actual boyfriend. They have, however, seen me mow the lawn, use a drill, and assemble furniture. They’ve also watched me cook, clean and make crafty holiday gifts for their teachers. Their “lullabies” are songs like Alyssa Bonagura’s “I Make My Own Sunshine.” For the most part, they think I’m pretty awesome, and I strive every day to be more and more of that woman.  Though I have had the occasional breakdown in front of them, I believe they see me mostly as happy, taking my life one day at a time, essentially on my own and content.

But is that enough? Is the lack of a committed relationship in my life affecting how they will look at relationships in the future? Will they look back and think I managed okay for a single mom, but that I ultimately failed because I didn’t have a man by my side?  Or will they think that being in a committed relationship somehow limits their ability to be confident, independent, kick-ass women? Does the life I’m currently living somehow send the message that those two things are mutually exclusive?  I realized that not only do I not know the answer, I can’t control how my daughters will one day interpret the choices I’ve made. All I can do is give them the tools to make their own informed decisions, whatever those decisions may be.  With the sting of the day’s conversation abated by my second glass of wine, I thought back to the original advice my mom had given me as a child, and instead of being angry at her recent, traitorous attempts to undermine it, I silently thanked her for giving me my very own tool set.